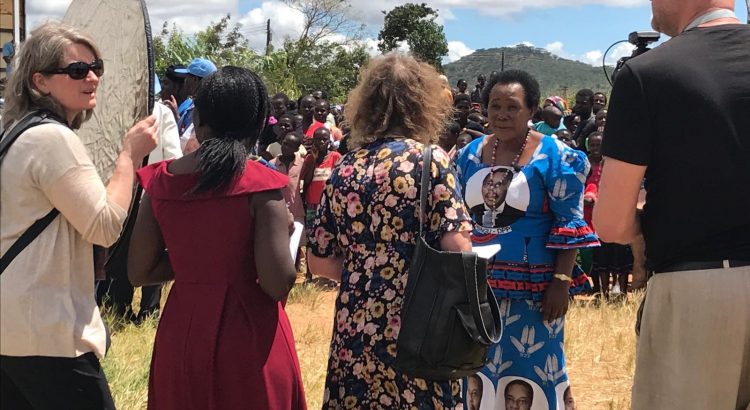 Making a film about their research project made Vibeke Wang and Ragnhild Louise Muriaas rethink how they talk about their research. -The editing revolves around cutting information to a bare minimum. The process itself contradicts everything you believe in as a researcher, they say. Still, they would not hesitate doing it again.

Several times a year, Vibeke Wang and Ragnhild Louise Muriaas are invited to give presentations about their ‘Money talks: Electoral financing of Women’project. And it is not only academics who would like to know more. The invitations may just as well come from local branches of NGOs and civil society organisations, or high school teachers. Talking about research, theory and methodology to a broader audience inspired them to think differently about how they communicate their research.

Rethinking research communication
Wang and Muriaas are researching electoral financing among female candidates in Malawi, a costly country to do politics in. There is no public funding of parties and candidates normally sponsor their own electoral campaign. Politicians are expected to give handouts to members of their community, and to contribute financially to local projects. Political rallies are supposed to be organized according to a certain format, where professional dancers, musicians and campaigning material in abundance is provided, all to entertain the crowd. Money contributes to credibility, authority, and ultimately, the chances of being elected.

-In many countries, like Norway, the public has faith in the electoral system. We believe that true political talent will be picked up on and let onto the stage, independent of personal wealth. In other parts of the world, politics is a very different endeavor, says Muriaas.

Being invited to talk about their project, Wang and Muriaas know by first-hand experience that there is an engaged audience with a big interest for research on politics. But talking to a broader audience, it also became clear to them that the actual costs of running for an election is an issue very few think about.

-We started asking ourselves how we could communicate this in a way that the audience can relate to, says Wang.

The answer was to show people how differently this works around the world. They joined forces with a film crew and set out making a storyboard. The learning curve was steep, both for the researchers and for the film crew who had never cooperated with researchers before.

-How do you make your information and data fit into the structure and narrative of a film? We had to rethink how we deal with our data, says Wang.

Using first and foremost qualitative methods in their ‘Money talks’ project, they depend on open questions, and many questions, designed specifically to capture depth, nuances and context. Working with a film crew and creating a film taught them that not only can short questions answered with a simple yes or no be informative, they can also be necessary.

Deciding what to include in the film or not was a nerve-wrecking experience for Wang and Muriaas. The film format forced them to step out of their comfort zone, into a world where you mercilessly kill your darlings and where you have to work hard not to succumb to the fear of ‘dumbing down’ your research questions and research findings.

The film crew, on the other hand, were more stressed about the unpredictability of filming in an environment where you are not in full control of your surroundings. Having worked in Malawi on numerous occasions, Wang and Muriaas were well aware that plans can change and that appointments made can suddenly be cancelled.

Money talks
The researcher/film team decided on filming three different candidates at three different rallies. They ranged from newcomers to more experienced politicians, and from government to opposition to independent candidates, but all campaigning to win a seat in the May general elections.

The interviews with candidates talking about the cost of running for an election and a funding programme designed to make campaigning achievable for more female politicians highlight the challenges women face trying to make their way into Malawian politics. And the footage from the rallies do not only serve the purpose of bringing the audience closer to a different world. It makes it clear to everyone who sees the film that engaging in politics in Malawi really can be costly, and that relying on pure talent will not necessarily take you anywhere. The drums, the dancers, the poets chanting, they all come with a price.

-Money really does talk, and there is no better way of illustrating this than by letting everyone see with their own eyes. The actual physical surroundings and the atmosphere, the bumpy bus rides, the colourful t-shirts and the music at the rallies, that is all part of the information we want to get across, says Muriaas.

The film, which will be used for teaching students at the bachelor level as well as for public events, will be launched in June, but the launch will certainly not be the end of it. The process has sparked a lingering interest, and even though the experience has been challenging, their budgeting in new research projects will take a different turn from now on. More than anything, they have learnt to approach their topic from a different angle, one that takes the public’s perspective.