We often say that, “Less is more.” Yet there are times when we simply need more of a certain thing-when more is more. In the OGP, there are too few high-impact commitments. In the case of action plan ambition, more is more. Our new analysis of OGP action plans shows that more ambitious action plans lead to better results.

At the 2016 Paris Summit, OGP’s CEO, Sanjay Pradhan, challenged all OGP participants to carry out more ambitious commitments. The goal was simple: every country should have at least two open government commitments that were credibly complete and would make a real difference. In OGP lingo, we call these “starred commitments.”

Here we are, two years later, and we can see how far we are in moving towards that goal. OGP’s Independent Reporting Mechanism has finished reviewing a huge batch of 800 commitments – and the results are thought-provoking. (We dive deep into the questions, including a bit of sectoral analysis, in the longer paper here.)

In short, we are on our way, but there is still much work to be done. Take the following two facts:

The question is: if completion is a shrinking problem, why aren’t we getting more starred commitments?

Put simply, ambition seems to be the binding constraint. The design of action plans is, by far, the biggest problem with how much impact action plans have. Take a look at the figure below -the design gap is much bigger than the implementation gap. Four percent of commitments would have rated stars if they had been credibly implemented. Yet a huge 89% of commitments would never have been stars, because they were not relevant (11%), not specific (9%), and would not have had a major impact (69%).

Figure: The design gap is much larger than the ambition gap 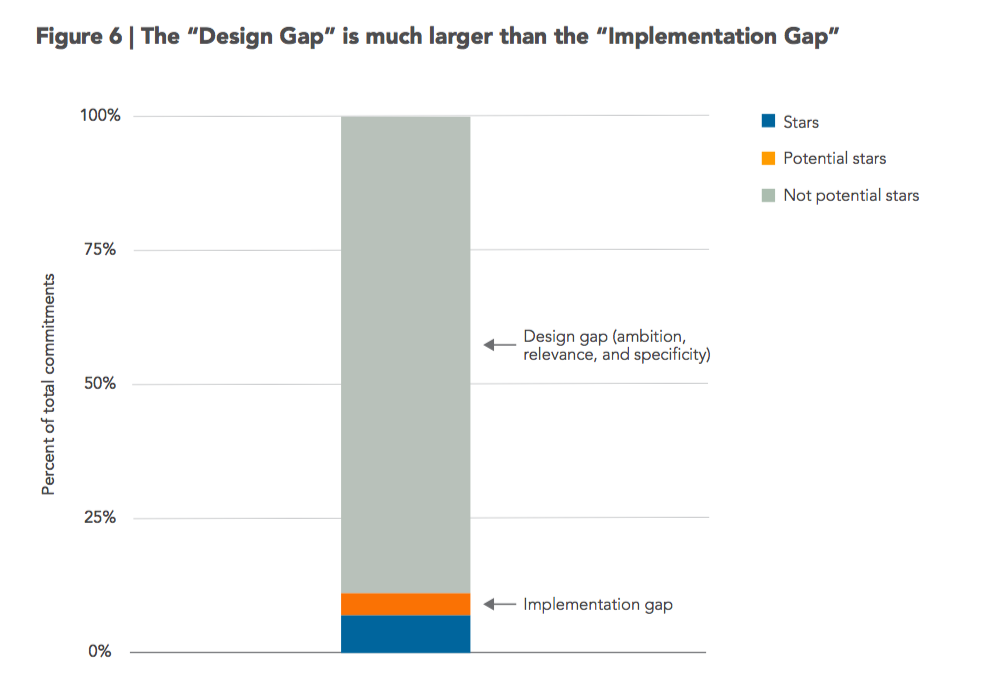 What does this mean for OGP?

The ambition gap means that we have to change and intensify the way we work. The assumption that we are going to get to bigger return on investment and bigger impacts by doubling down on implementation is probably wrong in most cases. Even if OGP countries implemented every potential star, we would not get to two stars per country. (And this is before we even begin taking into account the uneven distribution of “potential stars;” some countries have few while others have many.)

Implementation support can be costly, hard to scale, and is not a core function of OGP, which generally acts as a relationship broker and a marketplace of ideas. Rather, investment in strong action plans (of which we have a record number this year) is absolutely critical.

How we shrink the ambition gap is a difficult question. There are three commonly cited impediments to more ambitious commitments — politics, technical issues, and form.

Of the three, form is the most easily addressed. We need more concise, vibrant, and ambitious action plans. Some commitments may be high-impact, but are buried in a sea of minor deliverables and bureaucratic language. We need to put the citizen first in our language – what new capacities will they have as a result of a commitment?: How will governments change business as usual? Most action plans, as currently written, don’t tackle that issue.

Beyond ambition, the importance of strong peer exchange and support has never been clearer. We need more examples, like open contracting and beneficial ownership, where governmental, multilateral, and civil society partners have been able to use OGP as a lever to move a concept from a nebulous idea to an emerging norm.

In terms of politics, we need the whole OGP community, especially its Steering Committee members and founders, to lead by example. Each successfully implemented ambitious commitment can be copied and adapted by other countries. That’s where you, the members of the OGP community, come in.

Original article can be accessed on this link https://www.opengovpartnership.org/stories/when-more-more-realizing-open-government-partnership-s-ogp-s-potential-through-more?utm_source=T%2FAI+Newsletter+List&utm_campaign=e19a3fcb1e-EMAIL_CAMPAIGN_2018_05_01&utm_medium=email&utm_term=0_1a5ff28f1e-e19a3fcb1e-431571137