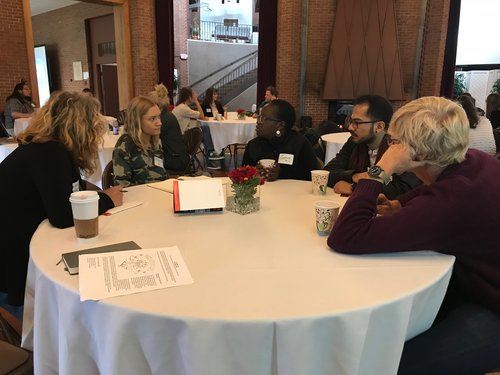 The original article “Training Citizen Journalists and “Building Community Power”: SLCJI Launches in Canton, NY” was authored by John Collins on the 15th of October 2018.

On an early fall weekend, a diverse group of North Country residents gathered on the campus of St. Lawrence University in Canton, NY, to inaugurate an innovative new experiment in grassroots journalism: the St. Lawrence Citizen Journalism Incubator.

Designed to provide community members with the opportunity to receive training and support for conducting their own independent, investigative journalism projects, the SLCJI was created by Weave News with the collaboration of North Country Public Radio, The Hill News, and Nature Up North. A St. Lawrence University Innovation Grant provided initial funding for the project.

More than a dozen North Country “Investigative Storytellers” were on hand for the SLCJI’s first-ever training event after having their project proposals approved by the SLCJI steering committee.

The weekend began with a Friday evening keynote lecture by Fiona Morgan, a freelance consultant whose work focuses on building stronger local media ecosystems through better public engagement. Morgan, who previously headed up the journalism program at Free Press, began by acknowledging that the ongoing “crisis in local news and journalism,” driven by consolidation in the media sector and the erosion of traditional business models, is coinciding with “a crisis in our democracy, where our systems of checks and balances appear to be in peril and our political culture is deeply divided.”

While the term “citizen journalism” is much-debated and has its limitations, Morgan argued, it can help call our attention to the essential idea that “journalism is essential to citizenship, and vice versa.”

Referring to a conversation she helped organize in North Carolina between local journalists and community members, Morgan emphasized that when given the opportunity, local people are eager to collaborate in the essential work of journalism:

Something happened then that’s happened every time I’ve been part of a conversation with local reporters who demonstrate a willingness and ability to listen and respond to people’s needs: the community members asked: How can I help? What can I do? What can we do together? This question, How can I help?, never fails to move me. I’ve been a reporter, and I know how hard and unrewarding the work can be. I also know how much impact it can have, and that quality reporting makes real change and accountability possible.

It means we find a role for people to play, a real and substantive role, and we rely on them to perform it. It is absolutely true that journalists, trained in practices of verification, possess skills that are undervalued and badly needed at this moment. Yet I often wonder why those of us who know this also speak as though these skills are non-transferable. Surely they can be shared and spread, making smarter readers and sharers of information in the process?

When citizen journalists are brought into the work journalism in this way, she concluded, they can play a fundamental role in building “community power” and a more democratic, participatory media system.

To get the Saturday training event going, Morgan led a “pro-action cafe” session designed to help the Investigative Storytellers sharpen their project ideas. One by one, the Storytellers stepped to the microphone to introduce themselves and the questions driving their projects. Community members then had the opportunity to sit with the Storytellers and consider Morgan’s first prompt: “What is the quest behind the question?” Subsequent prompts encouraged dialogue regarding the kinds of voices and information that might be missing from the story being investigated.

Stories being pursued by the Investigative Storytellers include the struggles facing undocumented workers, the local impact of the craft beer boom, the isolation of international students and students of color in the North Country, and the health of the Grasse River.

LEARNING THE SKILLS OF JOURNALISM

During the afternoon, attendees had the chance to attend workshops led by SLU professor and The Hill News advisor Dr. Juraj Kittler (Story Format and Structure), NCPR reporter and assistant news director David Sommerstein (Getting Inside Your Head: Great Storytelling With Audio for Radio and Podcasting), and Nature Up North director Dr. Erika Barthelmess (Environmental Storytelling With Nature Up North).

Following the workshops, the cohort of Investigative Storytellers gathered with Morgan and members of the SLCJI steering committee for a discussion of ethical issues in journalism. The day concluded with a workshop focusing on how to build a project “roadmap.”

“I am proud and happy to be part of [the SLCJI],” said Connie Jenkins, one of the Investigative Storytellers. “The weekend talk and workshops were inspirational as well as helpful in shaping/refining our ideas. It’s exciting that so many people came forward to help tell these stories and explore the news.”

The Storytellers will have several months to carry out their projects, and each will work with a mentor from the steering committee along the way. The first year of the SLCJI will conclude with a public event in April at which Storytellers will present the results of their work.