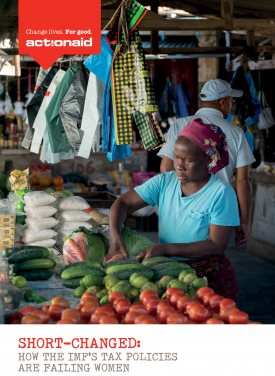 In recent years the International Monetary Fund (IMF) and other multilateral institutions have placed an increased emphasis on gender inequality and the need to address it. This trend has peaked since the 17 Sustainable Development Goals (SDGs) were agreed by the international community in 2015. Yet so far, its approach has been largely instrumental, promoting gender equality as a vehicle for achieving increased economic growth, and proposing simplistic solutions like facilitating women’s access to paid jobs. The IMF – like other institutions – has failed to acknowledge that the macroeconomic and tax policy advice it gives to countries reflects and reinforces patriarchal power structures, entrenching, rather than transforming, gender inequality.

Macroeconomic policies, such as taxation, can play a central role in transforming gendered power relations and challenging patriarchal structures and institutions, by facilitating systematic investments in public services, infrastructure and social protection. This should form part of wider strategies to meet national, regional and global commitments on women and girls’ rights, including tackling economic inequality and violence, and the financing of wider development.

Gender responsive tax and expenditure policies should be at the heart of the IMF’s efforts to tackle gender inequality, but they currently are not. In its 2018 publication, How to Operationalize Gender Issues in Country Work, the IMF has recognised for the first time that its macroeconomic policy advice may have ‘differential gender impact[s]… that could exacerbate gender inequality’. However it has not yet effectively systematised the process of investigating the gendered impacts of its policy advice at country level. The guidance note doesn’t mention tax as an area where there are differential impacts, nor has it put forward any guidance on what the alternative policy advice might resemble.

Macroeconomic policies, including taxation and spending, are neither gender neutral nor apolitical. In fact, decisions around how resources are raised, managed and allocated are inherently gendered and political. This is both in terms of who makes the decisions and the ways they impact upon particular countries and groups of women and girls within those countries. In this way, tax is a profoundly feminist issue.

This briefing argues that the IMF must urgently analyse the differentiated impacts of its tax policy advice on men and women, particularly women living in poverty. We believe the IMF should switch its focus away from largely regressive indirect taxes, such as

If the IMF was to make its tax policy advice consistent with an objective to reduce gender inequality, then advice should be grounded in evidence for taxes which will be gender-just and progressive and play the most meaningful role in redistributing wealth to ensure the rights of all women and girls are fulfilled. Progressive taxes ensure that individuals as well as businesses with higher incomes pay a higher share of their income or profits in tax. Because gender discrimination means that women generally earn less than men and have less profitable and productive enterprises, a progressive system of taxation would prevent women on low incomes from being locked into, or pushed further into, poverty because of heavy tax payments. It would also support the fulfilment of their wider social and economic rights by funding quality, gender responsive public services, infrastructure and social protection.

Summary recommendations to the IMF and national governments