On 30 January 2018 the International Budget Partnership (IBP) will release the Open Budget Survey 2017 – the latest round of the world’s only independent and comparable assessment of budget transparency, citizen participation, and independent oversight institutions in the budgeting process.

The Open Budget Survey 2017 findings on the systems and practices that countries have in place to inform and engage citizens — or not — in decisions about how to raise and spend public resources, and on the institutions that are responsible for holding government to account, come at a critical juncture. Around the world, there has been a decline in public trust in government, in part due to instances of corruption but also because of dramatic increases in inequality. In a number of countries, leaders who have disguised their intolerant and reactionary agendas with populist rhetoric have been swept into power by those who’ve been left behind. These political shifts have driven out many government champions of transparency and accountability — especially those from countries in the global south. More broadly across countries, there has been shrinking of civic space, rollbacks of media freedoms, and a crackdown on those who seek to hold government to account, including individual activists, civil society organizations, and journalists.

Because open and accountable public budgeting is at the center of democratic practice and equity, it is the first place we should look for ways to strengthen the interaction between governments and citizens. Ensuring that the budgeting process is characterized by high levels of transparency, appropriate checks and balances, and opportunities for public participation is key to stemming the decline in confidence in government and representative democracy.

In the face of the spread of profound threats to active, informed public participation, and thus the ability of citizens to ensure their governments will pursue policies that improve their lives, the Open Budget Survey 2017 will provide essential data on the state of budget transparency and accountability around the world.

The International Budget Partnership has conducted the biennial Open Budget Survey since 2006 to answer these two fundamental questions for representative government:

To answer these questions the Open Budget Survey (OBS) assesses whether national governments produce and disseminate to the public key budget documents in a timely, comprehensive, and accessible manner. In addition, the 2017 survey includes a newly enhanced evaluation of whether governments are providing formal opportunities for citizens and their organizations to participate in budget decisions and oversight, as well as emerging models for public engagement from a number of country innovators. It also examines the role and effectiveness of legislatures and supreme audit institutions in the budget process.

The survey, which is implemented by independent budget experts in each country and rigorously vetted, provides governments, civil society organizations, and development practitioners with key data and analysis to allow them to identify baselines and trends in country practices and implement or advocate for reforms to close gaps.

In addition to providing the latest findings on open and accountable budgeting, the report for the 2017 survey will also provide suggestions for improving countries’ public finance systems and practices to better ensure more effective and responsive use of public resources to meet public needs.

The Open Budget Survey 2017 could not come at a more critical juncture as we look to reinvigorate democratic practice, re-engage the disaffected, and restore public trust in public institutions. Be sure to see the results at www.openbudgetsurvey.org on 30 January 2018!

Between 2011 and 2014, Ghana went from boasting the world’s fastest growing economy to requiring a bailout from the International Monetary Fund (IMF). While a global downturn in commodity prices precipitated the fall, a lack of accountability in how public finances have been managed has been at the heart of the problem. Fiscal indiscipline, fueled by a lack of oversight and rampant corruption, left the government unable to mount an effective response during lean economic times.

Oxfam and its civil society partners in Ghana were worried that everyday Ghanaians would be left shouldering the burden of the economic crisis. Moreover, Ghanaians worried that their concerns and aspirations would not be represented in the high-level negotiations on the bailout between the Government of Ghana and the IMF. To address these concerns Oxfam and its partners coordinated a multi-level advocacy campaign. The campaign drew together a diverse coalition of civil society—from community activists to globally influential think tanks—able to represent and articulate local level concerns and project a united voice at the national and global levels.

This novel approach proved highly successful in driving important changes in policy and practice that have enhanced accountability, fiscal responsibility, and citizens’ participation. The campaign not only contributed to improving the laws governing how public finances are managed in Ghana, but also helped to increase pro-poor spending and protect crucial social services. 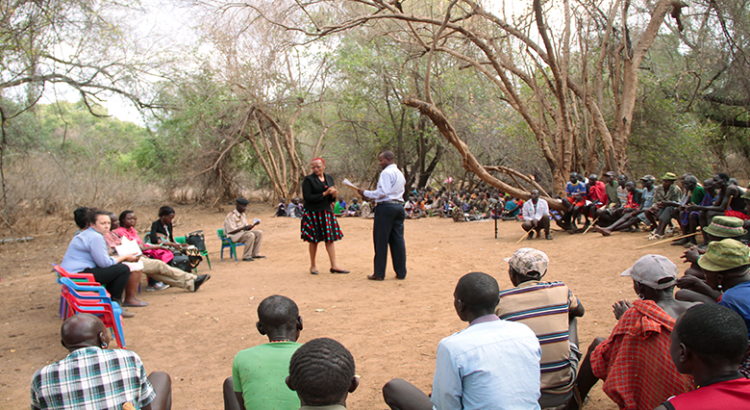 Milka Losia knew it was the river’s fault that her brother died. The culprit was the dirty brown water they had no choice but to drink.

‘Our village needs a hospital, people are dying,” said Benson Naitalima, a farmer.

Of course hospitals are important, Milka thought. But if it wasn’t for the dirty river water, they wouldn’t have needed a hospital in the first place. People like her brother would be alive and, Milka wouldn’t be caring for his orphaned children.

Milka heard there was going to be a meeting to discuss how local citizens like herself could get involved in making decisions on how money was going to be allocated and spent in the local budget. She decided to attend this meeting on “participatory budgeting” in West Pokot, a dusty arid county located in Kenya’s Great Rift Valley on the border with Uganda, to make a case for the importance of clean water. Milka hoped that others would agree with her.

Public participation in the budget is a key feature of Kenya’s Constitution, adopted in 2010 and implemented since 2013.

Participatory budgeting requires dialogue and a prioritization of community needs and solutions. At the meeting in March 2015, it was apparent that the community had many needs.

When Milka arrived in West Pokot, she saw about a hundred community members sitting under spindly acacia trees. Men were on one side, women on the other. Women rarely speak at these community meetings. However, the participatory budgeting increases women’s opportunities to express their opinions by providing a platform to take an active role in their community.

County residents, including women, expressed their needs that ranged from the need for a dining hall in the village’s only school to centralized market to sell produce from the farm.

Milka wasn’t sure if she was the first to propose water as a priority, but when she spoke, her opinion was popular.

“This water is bad, it has killed so many people,” Milka said.

“I walk two hours every day to collect water and it’s not even good water,” she told the group. Many cheered, particularly the women who were familiar with strenuous daily treks to fetch water. While access to an improved drinking water source has increased in Kenya over the years, 43 percent of rural Kenyans, like the residents of West Pokot, still lack one.

“This water is contaminated and so many people had gotten sick, my whole family has suffered,” added Veronica Maditan, one of the oldest women in attendance. She had been admitted to the hospital twice due to typhoid, a water borne illness.

Milka was delighted to get support from her fellow villagers but there still wasn’t a consensus on budget priorities.

“Irrigation could finish hunger in the area,” said one man, something the community could scarcely imagine.

Irrigation would be for the fields and cannot address the immediate need for clean drinking water, Milka worriedly thought.

Veronica was old enough to remember when clean water ran freely and the community didn’t have to rely on the dirty river. In 1978, a group of Norwegians built a borehole. For a few glorious years, villagers had water, until the tap ran dry. By then, the Norwegians had left and no one knew how the borehole worked, or had the money to fix it.

The community unfortunately had to go back to drinking the dirty river water.

Veronica suggested that instead of constructing an entirely new water system, they could just repair the broken borehole.

Before the end of a participatory budgeting meeting, the community must determine their top three priorities. Fixing the unused and broken borehole landed at the top.

“This was easily justified because it really answered the question of the water related borne diseases in the community and it was cheap for the county government,” said Honorable Thomas Ngolesia, the Member of the County Assembly of Sekerr Ward in West Pokot.

This was the first participatory budgeting project to be implemented in West Pokot. The county saved money by repairing the old borehole. Extra funds were used to make the borehole a hybrid run by both solar power and electricity—ensuring continuous access to clean water to the county residents.

“Participatory budgeting made the difference here,” said Prisillah Chebbet Mungo, The Head of Budget in West Pokot. “This project had been a priority for the community for a long time but it was ignored [by the county]. Now, whatever the community decides we have to implement.”

This article first appeared on the World Bank website here