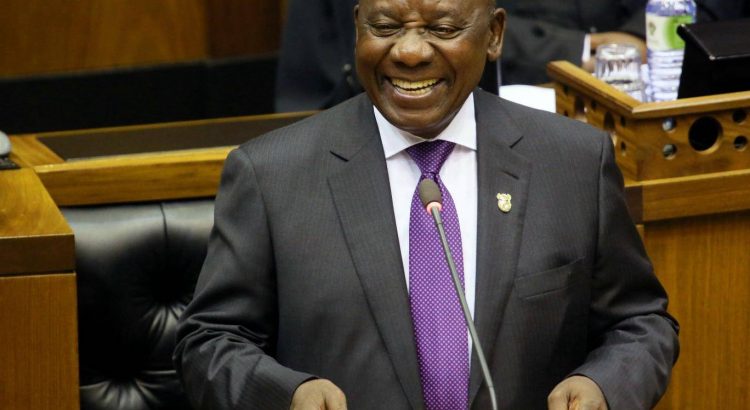 ‘We should put behind us the era of diminishing trust in public institutions and weakened confidence in our country’s public leaders,’ says Mr Ramaphosa

South African President Cyril Ramaphosa delivered a message of optimism and renewal on Friday in his first state of the nation address, saying it’s time for South Africans to put discord behind them and that the country will “turn the tide” on corruption in state institutions this year.

Mr Ramaphosa’s address capped a dramatic week in which he was elected by ruling party lawmakers following the resignation of predecessor Jacob Zuma, whose tenure was marked by corruption scandals. Mr Zuma was supposed to give the speech last week, but it was postponed because of the leadership crisis that fuelled uncertainty and anxiety in the country of 57 million people.

“We should put behind us the era of diminishing trust in public institutions and weakened confidence in our country’s public leaders,” said Mr Ramaphosa, who was Mr Zuma’s deputy before becoming South Africa’s fifth president since the end of white minority rule in 1994.

“A new dawn is upon us,” he said in a speech in parliament that drew applause but was criticised by the opposition as short on meaningful solutions.

“Cyril Ramaphosa’s plan for South Africa is too much of a continuation of the Zuma era,” said Mmusi Maimane, leader of the opposition Democratic Alliance. “There is no major policy reform, only some tinkering with the current policies that have not brought change to the lives of our people. There were too many conferences and summits announced, and not enough clear plans for fixing the problems.”

Mr Ramaphosa, 65, faces the hard task of rooting out corruption that flourished in both state enterprises and the private sector under Mr Zuma, implicating figures in the ruling African National Congress (ANC) party that he now leads. In addition, he must tackle sluggish economic growth, high unemployment and economic inequality that are among South Africa’s most deep-rooted problems.

The new president said his administration would concentrate on creating jobs and attracting investment, while also possibly downsizing bloated government departments and restructuring state-owned enterprises that are inefficient and prone to corruption.

“This is the year in which we will turn the tide on corruption in our public institutions,” Mr Ramaphosa said. “The criminal justice institutions have been taking initiatives that will enable us to deal effectively with corruption.”

South African authorities want to arrest a key member of the Gupta business family accused of using its links Mr Zuma to influence Cabinet ministers and secure state contracts. The suspect, Ajay Gupta, is considered a fugitive after failing to turn himself in, according to police. Eight people, including a member of the Gupta family, have already been arrested as part of an investigation into alleged corruption involving the Guptas, who deny any wrongdoing.

The family is a flashpoint for national anger over “state capture,” the term used by South Africans to describe an allegedly wide-ranging effort to loot state enterprises under Mr Zuma. Mr Ramaphosa said he supports the work of a judicial commission that is about to investigate the phenomenon, but one opposition leader said the new president would have to turn on his own political party if he is serious about fighting graft.

“He must arrest his own colleagues because they are corrupt,” Julius Malema, head of the opposition Economic Freedom Fighters, told eNCA media.

A figure under scrutiny over his relationship with the Guptas is Finance Minister Malusi Gigaba, who is scheduled to unveil the South African budget in parliament next week. Opposition parties say Mr Ramaphosa would be sending the wrong message if he allows Mr Gigaba to deliver the budget speech, though the new president has yet to announce any Cabinet reshuffle plans.

Mr Ramaphosa was a lead negotiator in the transition from apartheid to democracy and became one of South Africa’s most prominent businessmen. He now leads a government anxious to shed months of political limbo and public frustration, and the strengthening of the South African currency, the rand, against the dollar is an indicator of optimism over Mr Ramaphosa’s ascent.

However, the new leader indicated he is aware there are no easy fixes to South Africa’s challenges, which date from the era of apartheid a generation ago.

“We remain a highly unequal society in which poverty and prosperity are still defined by race as well as gender,” he said.

The original article can be found on this link http://www.independent.co.uk/news/world/africa/south-africa-president-cyril-ramaphosa-speech-corruption-turn-tide-a8214911.html