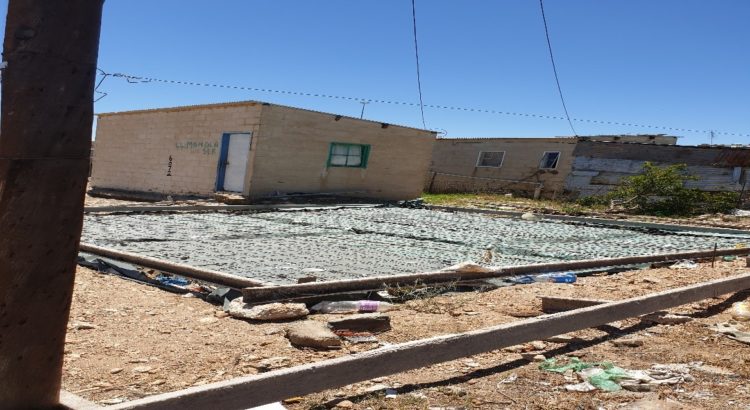 Originally written by Esteri Msindo on the 07th July 2020

When the Department of Human Settlements deliver a house to its beneficiary, the beneficiary signs a letter called ‘a happy letter’ as he/she gets allocated a house. However, when the house is sub-standard, a few years down the line the joy of owning a state house fades away leaving the poor unhappy. This is the case with the people of IYM ward 3 residents where a programme to fix houses with defects (rectification) started in 2013 to rectify 1350 houses and the target was reduced to 900 due to financial challenges on the main contractor according to the ANC Chief Whip for Inxuba Yethemba Municipality.

On 23 July 2019, the community representatives of ward 3 in Inxuba Yethemba Municipality (IYM) handed over a petition to their local municipality, addressed to the MEC for Human Settlements, Ms Nonkqubela Pieters and the Cacadu District Municipality officials of Human Settlements. Key issues emerged from their list of demands, combating corruption, improving service delivery and job creation. The community alleged that the Department of Human Settlements has failed to deliver quality housing and by doing so fail to create a better living environment for the people. The community demanded close monitoring of the rectification project in order to deal with any corruption on appointing contractors and supply chain. The National Home Builders Registration Council (NHBRC) must be present during the construction. IYM claims in response, that NHBRC has been involved in the process, which begs the question of why the structures being built are of poor standard.

They called for the Department to practice people centered development that involves the community, which the community feels the Department has failed to do through the rectification programme. They demanded the use of local contractors for the project and an end to giving contracts to undocumented immigrants, in accordance with the Expanded Public Works Programme (EPWP). The EPWP programme seeks to empower local communities and community members were concerned that the project does not benefit the IYM community as contracts are given to outsiders in an area of high unemployment. In response to the issue, IYM identified the main contractor as Veren Builders, who was contracted by the Department, who appointed sub-contractors Takela and Qakazile and the two sub-contractors subsequently appointed local contractors for labour only due to the fact that local contractors had no financial capacity and some were not NHBRC registered.[1]  Although sub-contracting is permissible, the implications of further sub-contracting mean at each level the contractor ensures that they remain profitable and that mean the money directed to construction can eventually be limited and therefore compromise the quality of the house. This can partly explain the continued construction of sub-standard houses.

Among other things, the community demanded speed delivery on title deeds to state houses beneficiaries and for the Department to provide houses to the 4000 people who are still in need of shelter and at least for the MEC to come and engage with those on the waiting list for state houses. The community’s list of demand also included the investigation and dismissal of any officials that are implicated in corruption in the rectification project.

The rectification programme was introduced by the Department of Human Settlements to fix state houses with defects. Initially rectification was targeted at pre-1994 housing stock, but due to continuous construction of poor-quality houses post-1994, the programme extends beyond 1994 housing stock nationally and is currently on going in the Eastern Cape Province.  The Human Settlements Minister, Lindiwe Sisulu pronounced an end to rectification programme in 2015. However, the Eastern Cape Province has continued rectification as per need. The community in IYM alleges corruption in the appointment of contractors, irregularities in supply chain and a general failure on the part of government to be transparent, accountable and to monitor the ongoing rectification project. The rectification project, said to be undertaken by Takela Construction[2] has reportedly been constructing sub-standard houses. Details for the rectification project in question, cost and timeline could not be accessed from the municipality by the PSAM. The community demanded that the MEC visit their community within seven days of receiving the petition.

Seven months after their petition – members of the community indicated that their demands had not been addressed. Instead, the Parliamentary Liaison Officer for the Eastern Cape Department of Human Settlements visited the community on a fact-finding mission and the community leader alleged that he warned them not to work with an NGO, “that is fighting the government”. In August 2019, the community leader approached the Public Service Accountability Monitor (PSAM) to assist in the matter and to visit the place. The striking feature of shoddy work in construction of houses is evident on the ground, not only those constructed in the 1990s but those newly constructed to replace the 1990s are poor quality houses too as the pictures below show. Figure 1: House with defects constructed in 1996 in IYM, Cradock

The project to fix houses with defects in ward 3, IYM is undertaken on old structures built in the late 1990s. In some cases where the house is totally broken down beyond repair, the programme allows the rebuilding of a complete structure to replace the old one. On some structures, one could see inside the house through holes on the walls. The worse problem in IYM is that the houses that are supposed to replace the old sub-standard structures are also not to a good standard. One could literally touch the walls and plastering begins to peel off (see Figure 2  below). Figure 2: Newly constructed substandard house in IYM. A community member touching the walls and the plastering falls off.

To make matters worse, some sites of construction have been abandoned for a long time left with foundations only with no hope for completion any time soon (see picture below). The residents in ward 3 are greatly frustrated by what they think is the collusion of ward councilors, the government and other political representatives in acts of corruption, poor administration and abuse of public funds. The community fears that if these issues are not addressed as soon as possible they will result in violent protests that may cause destruction or bloodshed. When the Department constructs poor standard houses to replace those with defects, that amounts to wasteful expenditure on public resources as poor structures will require rectification again in the future. The houses are handed over to the beneficiaries; however, the quality of houses makes the beneficiaries unhappy instead of celebrating house ownership for the very first time in their lives. Without addressing the root problem(s) that causes construction of poor quality houses, the Department of Human Settlements is creating a moving target on rectification that will not be possible to clear, as communities will in future call upon government to rectify the same houses.

The community strongly feel that their housing rights have not been met even after receiving the house as the condition of those houses are not of a good quality. The community expressed concerns about how the houses are not suitable for people with disabilities making them vulnerable to injury. Below is an example of such a structure. The current occupant is a community member who is faced with challenges in terms of using his house. The defects on the house pose a risk to the occupant with special housing needs. Figure 4: A house owned by the disabled beneficiary in IYM

The observations by the PSAM confirms the plight of the people in ward 3.  Their housing rights could be realised if the Department address their concerns because they receive the happy letter but they are not happy at all. The government must investigate the allegations of corruption and mismanagement and address them if confirmed. In addition, the government must adhere for calls to closely monitor the process of building and ensure the houses being built are to the standard expected by the NHBRC. This will ensure the people of IYM have access to adequate shelter.

School of Journalism and Media Studies

[2] The name of the construction company was provided by the leader of the community and was also mentioned in the response to the petition by Inxuba Yethemba Local Municipality.