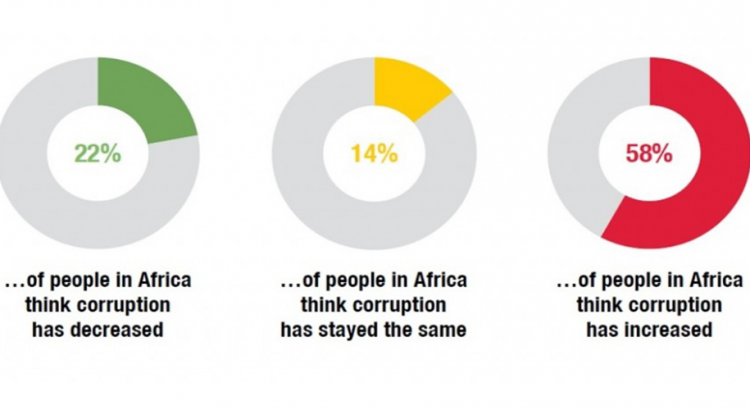 For the latest African edition of the Global Corruption Barometer, Transparency International partnered with the Afrobarometer, which spoke to 43,143 respondents across 28 countries in Sub-Saharan Africa between March 2014 and September 2015 to ask them about their experiences and perceptions of corruption in their country. Shockingly, the findings estimate that nearly 75 million people have paid a bribe in the past year – some of these to escape punishment by the police or courts, but many also forced to pay to get access to the basic services that they desperately need. A majority of Africans perceive corruption to be on the rise and think that their government is failing in its efforts to fight corruption; and many also feel disempowered as regards to taking action against corruption. In Sierra Leone, Nigeria, Liberia and Ghana citizens are the most negative about the scale of corruption in their country.

On 1 December 2015, Transparency International together with Afrobarometer launched its key findings on corruption in Sub-Saharan Africa. These findings are based on South Africa’s Round 6 data, which highlighted declining confidence in government performance on fighting corruption since the last survey in 2011 (see Afrobarometer Dispatch 64 for full results, available at www.afrobarometer.org). As Figure 1 (below) shows, no other country besides Botswana currently has a majority of citizens who believe that their government is performing well in combating corruption. South Africa fared particularly poorly on this indicator, falling below the Sub-Saharan average of 32% and ranking third worst in Southern Africa, preceded by Madagascar (9%) and Zimbabwe (17%). At present, only 2 in 10 (20%) South Africans believe that our government is performing well in combating corruption, which signals an urgent need for action.

Respondents were asked: How well or badly would you say the current government is handling fighting corruption in the government? (% who said “very well” or “fairly well”)

Overall, the Global Corruption Barometer found that 58% of Sub-Saharan Africans believe that corruption increased in the 12 months preceding the survey, while 14% believe that it remained the same, and 22% that it decreased. Unfortunately, South Africa was the worst performing country where 83% of South Africans believe that corruption has increased in the past year (see Figure 2, below). The country was followed by Nigeria (75%), Liberia (75%), Ghana (74%), and Benin (73%) in the top 5 of worst performers.

Respondents were asked: In your opinion, over the past year, has the level of corruption in this country increased, decreased, or stayed the same? (% who said “increased a lot” or “increased somewhat”)

South Africans’ growing perception that corruption is rampant in the country comes as no surprise given a string of recent scandals such as the controversial Nkandla upgrades, the Passenger Rail Agency of South Africa (Prasa) locomotives and Fifa bribery debacle. But it is alarming nevertheless—particularly if citizens feel disempowered. A majority (56%) of citizens feel that they can make a difference in combating corruption, and that is positive and signals willingness to act. Also citizens feel more empowered to do the same, for example, in Botswana (72%), Madagascar (70%) and Namibia (69%). Accountability is considered an essential component of democracy, and the data shows that the majority of South Africans are actively trying to combat corruption. However, empowering all citizens and having them assist in combatting corruption remains a challenge. Mass civic action usually only occurs after something drastic has happened.

On the other hand, however, reported incidence of bribery in South Africa (7%) was below the Sub-Saharan average (22%) and well below the highest figures reported in Liberia (69%). South Africa fared third best after Mauritius (1%) and Botswana (1%), which indicates a degree of civic action in combating corruption. The vast majority of survey respondents who accessed essential government services “never” paid a bribe in 2015. This indicates eliminating corruption is possible, especially when citizens take onus in doing so. As a way forward, both horizontal and vertical accountability need to be reaffirmed. For South Africans, a starting point has been to not pay bribes, but this masks the fact that people may not feel comfortable to tell an interviewer whether they have paid bribes, as they may feel it would incriminate them.

On the horizontal dimension, the United Nations (UN) and African Union (AU) play a pivotal role by guiding countries on how to effectively deal with problems, including corruption. On the continent, the AU further needs to assist by providing mechanisms and guidelines in order to advance the anti-corruption convention. Internally in South Africa, opposition parties in Parliament have a role, and channels such as the Chapter 9 institutions need to hold one another accountable. While simultaneously the rule of law should be upheld to combat corruption in other sectors.

When evaluating vertical accountability, citizens should be reminded that they have a role in providing check and balances. They should not overlook small injustices or acts of corruption. Furthermore, they should utilise available networks to speak out about corruption by employing networks such as fraud lines and civil society organisations like Corruption Watch. Last but not least, as civil society—whether a non-governmental organisation, non-profit organisation or faith-based organisation—we need to continue our fight against corruption, as well as consistently include ordinary citizens in the effort.

In closing, corruption not only disadvantages the poor, but it also erodes good and quality leaders and civil servants. So the next time you witness an act of corruption, will you speak out?

This story was originally published on the following website: http://www.ijr.org.za/news-and-events.php?nid=277&type=news

The report’s data was collected by Afrobarometer surveys in 28 Sub-Saharan countries and is available at: http://www.transparency.org/whatwedo/publication/people_and_corruption_africa_survey_2015. Results are still forthcoming for Gabon, Mozambique, and São Tomé e Principe.

Check Corruption Watch on all news and updates on corruption: http://www.corruptionwatch.org.za/